I had heard about his once before, and just a couple of days ago, I heard it again. This came from NPR's HIDDEN BRAIN program. The concept is known as ""Deep Work."

This really became relevant because just yesterday, I was talking to one of my clients who had been struggling with her writing. In fact, she had called noting she had only gotten one page written that day. For this writer, this is a big setback. She is someone who could normally average 7-15 pages on a regular basis.

She had never gotten into that Deep Work State.

Deep Work, in simple terms, is the idea of becoming overly focused and immersing oneself in an 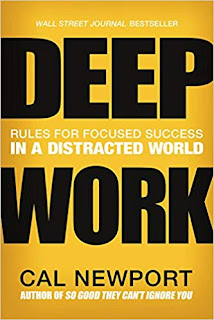 activity. Cal Newport, in his book focuses on how to eliminate distractions to allow you to fully get involved with the work you are doing.

He talks about people, believing they are fully involved with their work, but will stop, every now and then, to...
While it might feel like you just took a quick side look at this message, that small shift caused you to get distracted just enough to lose that focus.

IN the case of the writer, the dogs were just being dorks. She would sit down at the computer, thinking they were settled, and then one would feel the need to get up and walk around, accidentally bumping into one of the others and then distraction would kick in. Add in that, if the dogs were settled, the phone would ring from one of the kids in college in New York, or the infamous robo-call.

It sucks. And, we have all be there.

So how do we fix this.

It might not be something you can do all of the time, but when it is time to write, un-plug, eliminate those distractions. Try...
This IS possible to do, but it requires a commitment and dedication on your part.

Again, you will not likely have the chance to do this all of the time, but if you want to be successful, you have to do this more often.

Have a great weekend!

Posted by Scott Eagan at 6:28 AM
Email ThisBlogThis!Share to TwitterShare to FacebookShare to Pinterest
Labels: Writing Craft